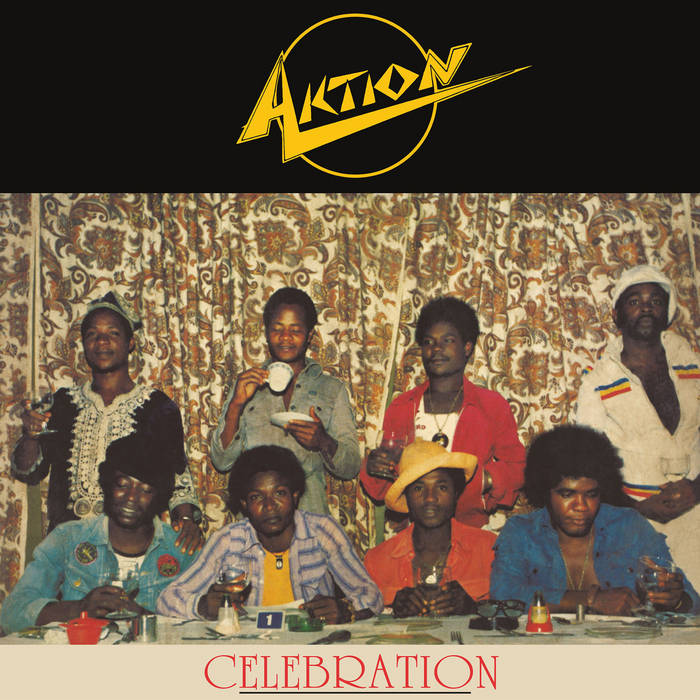 nicholas hamnett Aktion may be a '70s band, but from a 2019 perspective they are no less fresh and vital to the ears for that.

I've always looked to the past as much as to the present for my musical choices.From the days of playing my parents' hand-me-down Beatles and Rock n Roll records on my Dansette record player - the equivalent then of today's cheaper-end Crosleys or Steepletones, I like to keep touch with fundamentals.

What this band LACK is:

This is genuine, authentic, ultra-groovey, fun funk rock.Made by humans with vitality, who you can tell really love it for all the good reasons; and THEY do it quite basically.

THIS IN NO WAY CONSTITUTES A LEGAL DOCUMENT.ANY REFERENCES TO WHAT IS ALLEGED TO BE GOOD MUSIC (AND SELLS!) IS MERELY THE AUTHOR'S OWN
DELUDED OPINION.

Mix righteous fuzz guitar, bad-ass keyboards and ecstatic African rhythms and what have you got? Celebration by Aktion - a slab of of heavy Afro-funk-pysch-rock from the hardest working band in 70s Nigeria. Aktion had a residency at the Lido Night Club and Restaurant in Warri but toured constantly. Drummer Ben Alaka and Bass player Renny Pearl Nwosa created a bedrock of hardcore rhythm that allowed the rest of the band to cut loose and follow their own groove. Celebration, their second album, sees Aktion at the height of their powers. Ben Alaka had claimed his crown as the best drummer in the country (Proof: the intro to ‘Centepede’), keyboardist Zeaky George has got his freak on (have a listen to ‘We’re Laughing’) and Jimi Lee’s searing guitar breaks were leaving scorch marks across every track (‘Celebration’, ‘Groove The Funk’, take your pick.) Sadly, Celebration was also their last album. Renny and Lemmy left to form The Stormmers. Jimmi Lee hooked up with Mona Finnih and discovered disco. But Celebration remains a psych rock monster - and a funky, fuzz-filled tribute to Nigeria’s rocking east. - Peter Moore