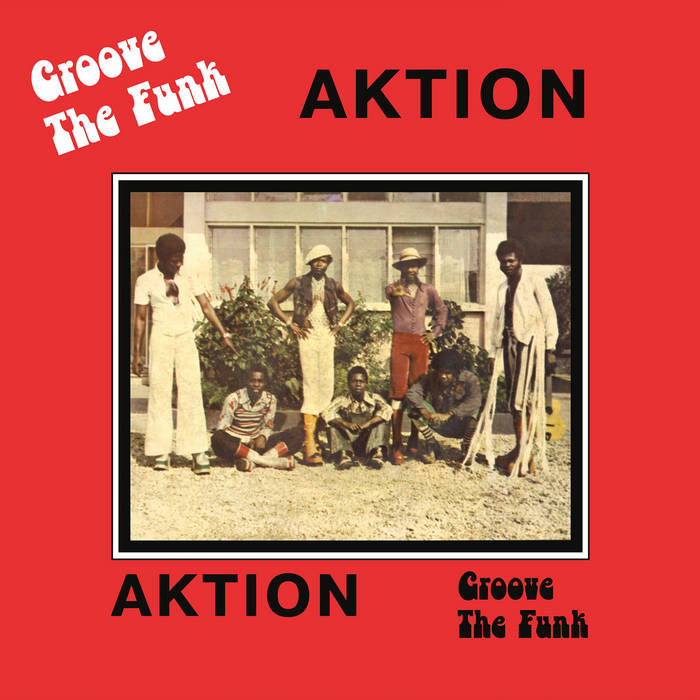 Groove the Funk is a essential and influencal early Afro-Funk LPs from 1975. The album was released in Nigeria and the whole LP is really something excitingly special, carrying a unique style of fuzz guitar and keyboard with ecstasy rhythms that can be experienced only from the heart of Africa. Nigeria had a rich musical history with a variety of bands that were playing their unique Afro-Funk with incredible rhythms. In Aktion's case thanks to one of the best drummers of that time, Ben Alaka. Sadly most of the scene vanished like in Zambia and their Zam Rock scene, but thanks to collectors worldwide a part of Nigerian music heritage remained with us to be enjoyed. One of the most explosive bands were Aktion (also known as The Action 13 or The Actions). They were from Warri, which is a city in south Nigeria and their debut album was released by Clover Recording Organization from city of Aba. Clover Records founder Ben Okonkwo was a very influential man for the Nigerian music scene. His label released a lot of music including (Super)Wings, Akwassa, The Visitors, Mary Afi Usuah, Folk 77, The Doves, The Apostles, Mansion as well as some fine compilations of Clover artists. Aktion were among the most exciting bands coming from the scene. Renny Pearl Nwosa was the group's leader together with Lemmy Faith Nwani, who was a well respected drummer playing even for the best known Nigerian Funk band The Funkees (soon out on PMG). Renny and Lemmy together also formed the band The Stormmers, who recorded 2 incredible albums (also out soon on PMG). Aktion were playing all across their part of the country. Nigeria had a very well known club called Lido Night Club and Restaurant and AKTION were staying there for awhile. They played many college campuses all around Nigeria and also many villages to entertain Eastside students. Aktion later on recorded and successfully released another album Celebration in 1977 (out soon on PMG as well) and then some members moved on to join The Stormmers and One World. Groove the Funk is a very exciting intervention in one of the most exploding scenes coming from Africa. It's afrobeat in its best form mixed with amazing funky-psych grooves. Lot's of fuzz guitar and bad-ass keyboard playing. Certainly a great look into Nigerian scene.