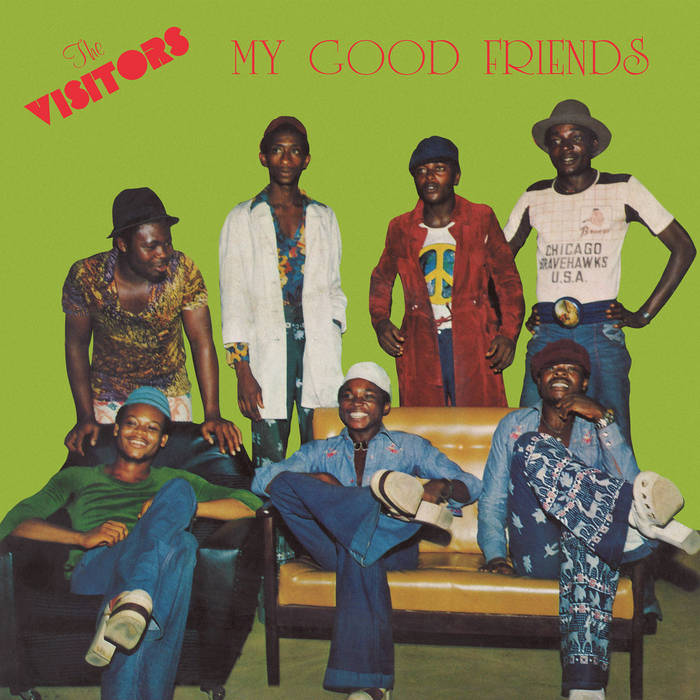 "Those [fleshy!] friends thou hast, grapple them unto thy soul with hoops of steel!"
- William Shakespeare.

Words I used to follow, religiously.Now I find I do everything in my power to rid myself of old friends.It's a strange, counter intuitive, survival technique I have adopted of late. It saves me having to deal with difficult questions like: "How are you?" or "What you been up to?
(- Great. Nothing. Move on!)

At the same time as denuding myself of mates, I am simultanously filling my life with vinyl surrogates. Like my new one here: The Visitors.
Lovely bunch of guys! Real sounding.

Such surrogacy is, in a way, no less than the rest of humanity is doing right now.Spending, that is, less and less time in actual physical contact with the (fake!) world, and with one's mates, in favour of the (real!) digital world, and one's social media friends, who are so much easier to deal with than their primitive, fleshy counterparts.

The other day, as I was out in the old Organic Outdoors, which i'd forgotten was there,
to be honest, but my air-con had broke down, and I remembered: in an emergency, you can go out
there and have a little sniff of the polluted stuff whilst Technological Reality rights itself.

So, out there, My Good Friend, HIMSELF, visited me. He suddenly appeared. Without any warning what's so ever. There he was, IN-THE-FLESH!! I mean, IN-THE-ACTUAL- FLESH! Touched my arm with his long sausagey fingers and everything. I was petrified.Felt totally exposed. I mean, I thought I knew him: flat, two dimensional, I could switch him off. But here, in the Organic Outdoors, was this...this...fully dimentional, soft and horridly squidgy thing👾 a...well...like kind of...one of those ancient thin and stretchy human-jelly-person people! I ran off! Couldn't get words out, him telling me all the great stuff he'd been doing.Couldn't think of a thing to say! Terrifying.It really was. Now I'm thinking, I should learn to drive! Organics can't get at you through a windscreen, can they?Now, I just ghost him.

Anyways, good to get back to reality with you here on the net, mate! See you down the What'sApp at the weekend for a virtual pint and a good ol' tweet!

Yes...erhum! The Vistors: My Good Friends! Another great, organic funk-rock album. A sound that is analogically as close to in the flesh as you can get.

Set up by producer Ben Okonkwo in 1973, the BEN label, and its offshoot Clover Sounds, broke some of the biggest bands outside of Lagos. The Apostles, Akwassa, The Doves, Mary Afi Usuah and Aktion all got their start in the cramped studio in the commercial heart of Aba. The least known – and arguably one of the best bands on the label – was The Visitors. For a short, sweet time between 1975 and 1978, The Visitors were creating the most righteous sounds in the East. We’re talking deep afro-funk with generous dollops of rock psych fuzz synth madness. My Good Friends, their second album, find them at the height of their powers. The musicianship throughout the album is extraordinary. Check out the synth and guitar wig out on ‘Here We Come Brothers’ and the searing guitar break that scorches the slinky groove of the title track. This album is impossibly hard to find and selling for high prices, one seller justified the high asking price by arguing that “once you let this record in your bones, it's not coming back out.” Thanks to the good guys at PMG, your bones can now get the good stuff for considerably less. - Peter Moore